This week on Talk Recovery Radio Ruth Spencer, author of “The Thirteenth Overdose: Parenting my son through FASD and addiction” is joined by her son Tim to talk about addiction in the family and the affect recovery has had on their family. Second on the show Dennis Berry is a best-selling author, national speaker, and coach and has been sober since 2003, Dennis is also the host of “The Funky Brain Podcast.” 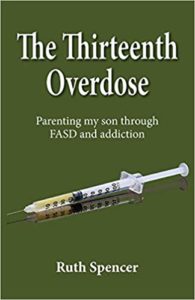 Tim is an adult with drug addictions and FASD. Living on the streets, he overdoses so often the first responders know him by name. He steals to buy himself heroin. He serves time, breaches probation, and returns to jail. His health deteriorates. With broken bones, infections, Hep C and heart failure, Tim gains the help of police and other support systems to triumph over his addiction. In an honest portrayal from a mother’s perspective, Spencer puts in the front seat of her family’s daily struggle with her son’s addiction.

Tim who was born with FASD started using drugs and alcohol when he was 17 years old, he is 45 now. Tim says that his using was 4 or 5 times a week, at the beginning it was alcohol and marijuana, then in the last 10 years it became cocaine, speed, and heroine. Tim says that he knows Fetal Alcohol Spectrum Disorder always played a role in his addiction but until he went into recovery, he did not know the extent of how it affected him. The title of the book “The Thirteenth Overdose” tells Tim’s story in it. He had overdosed 13 times, lots of naloxone lots of hospital trips but when they wanted to keep Tim in the hospital, he kept on leaving and trying to find his next fix. It was not until the 13th overdose when he actually accepted the handout that was being given to him.

Ruth, Tim’s Mother says that she did not know the extent of Tim’s addiction until it was over, the years it took Ruth to write the book she realized that his addiction was getting worse and worse but when she was in it and in the chaos, she did not know it was getting worse. When Tim accepted the help, he was offered a hand by the same lady after every overdose, and he finally accepted help and went to Comox Valley Recovery Centre.

Tim shares about how he can start to work on living with FASD, Tim feels as he now has a clear mind and has the ability to slow things down, journal get his thoughts down on paper and it makes him feel more relaxed to get it out and read it. Tim journals every morning as part of his routine of his sobriety and recovery. Tim talks about dealing with FASD is all about living the best life he can, learn how to cope with it, he tries his best every day to be better and enjoy living his life.

The book “The Thirteenth Overdose” purpose is to help people cope. Ruth says she wrote it because she knows that lots of moms go through the same feelings and issues. Ruth also mentions that all you have in the end is your relationships so don’t mess that up, whatever you do, hang on to that relationship with your children. Ruth says all she wanted was her son Tim to survive his addiction, since she lost her youngest son at the age of 25 who also had FASD.

My name is Tim.  I am 45 years old and father of 2.  I had an interesting beginning to my life.  I was born with FASD. Then put in foster care and later adopted by a very nice family at age of 18 months old. I spent my whole life with them. My FASD plays a huge part in my life decisions, both good and bad. But my family was always there to support me and hope one day I would  see there was a better way of life. It only took me 26 years of drinking and drugging, before I decided to sober up. I am coming up to 3 years sober in August. Now that I am sober I am seeing the perspectives of my family and friends, and how much my addiction affected them. I am very lucky to be able to spend time with my kids. It has been quite the journey. 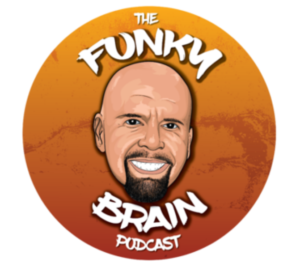 Dennis Berry is a Life Mastery Coach and has been working with people worldwide for over 15 years. With modern technology, he can work with anybody anywhere via Zoom.

He has been sober since April 8, 2003 during which time he became a successful businessman, athlete, and family man. His journey in recovery helped him find his mission in life, which is to help others achieve inner peace and success, and master every area of their lives. Dennis knows what it is like to be helpless and hopeless with no positive direction. He was able to climb out of the gutter and transform his life and he spends his life helping others do the same. If you are sick and tired of being sick and tired and you are ready to make changes in your life, book your first FREE consultation today! You will see some light at the end of the tunnel.

Dennis shares the story about how in his early recovery people would say “Oh Dennis has funky brain again” that is where funky brain came from. Recovery is not about not drinking it is about growing up and maturing and figuring out the world Dennis says. So he called his podcast “Funky Brain” and he called his book “Funky Wisdom A Practical Guide to Life” because wisdom implies growth and understanding.

Dennis says he did not plan to write the book, he says that he was just writing things that he felt had to come out of his head and go on a piece of paper. Dennis says he took a lot of the principles from the 12 steps and put together a six-step program that anybody could do every day to help you navigate through the pains of daily living. Such as, being overwhelmed, someone not behaving the way they want them to behave or daily issues you face in life. Dennis then tells people of a principle that they have probably never heard about what is called the “How approach to life”, when people ask the questions “How to I have good relationships?” “How do I get healthy?” Dennis says the answer is in the question “HOW” honesty, open mindedness, and willingness. Dennis says it starts with admitting there is a problem, you can not solve a problem you can not admit exists, once someone admits there is a problem, you can do something about it. Then someone becomes open to listening about a new way of living. In Dennis’s book, he gives practical examples and steps on how to approach things in life, and he says you can really accomplish anything.

Dennis says he loves the 12 steps and the 12-step program, but he would not say he improved on the steps, he feels as there are different ways to reach people. But when it comes to clients being lonely and in isolation, he would suggest them go to 12 step meetings as there is a big sense of community at 12 step groups 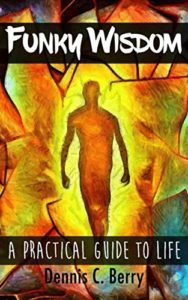 About the Book: Author and motivational speaker Dennis C. Berry delivers his witty unique spin on our turbulent world along with a groundbreaking solution to navigate it that will transform your life, settle your mind, and bring you inner peace and success beyond your wildest imagination.

He shares his personal journey with raw honesty and shows how he was able to overcome alcoholism and drug addiction, health problems, financial difficulties, relationship issues and basically just deal with “growing up” a little later in life. You will learn principles that you can apply in every aspect of your life to help make you wealthier, healthier, happier, and wiser.

Funky Wisdom contains teachings from Taoism, Buddhism, and other ancient principles, along with modern day philosophy, spiritual principles, and solutions to living in today’s busy world. It is a compelling program that will transform you from the inside out and leave you with a blueprint that will guide you through the rest of your life feeling happy and free. It applies to anybody looking for more inner peace, success, and happiness.