Talk Recovery Radio airs live every Thursday on 100.5 fm in Vancouver from 12 pm to 1 pm, hundreds of shows over 6 years.  Bringing addiction recovery issues to the airways. Powered by #NewWestRecovery

Join us this Thursday as Chris Cull from Inspire by Example shares his addiction recovery story. 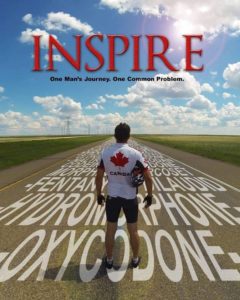 In the summer of 2014 Chris bicycled across Canada from Victoria, BC to St. Johns, Newfoundland. With a group of young filmmakers they created a documentary title Inspire about the Canadian prescription drug epidemic, revealing just how much this issue has affected us.

As Chris’ father’s disease progressed he fell further into the depths of addiction, ultimately committing suicide in a motel room. This is when Chris began to self medicate and his life fell apart. He started by using a couple Percocets, which seemed to calm him down. He hid this from most people, including his girlfriend at the time, whom he loved dearly. As the drugging escalated into roughly 5 x 80mg OxyContin a day, his deception grew exponentially. He began to manipulate and take advantage of people’s trust, telling outlandish lies. His family and friends were ashamed of him, the girl who loved him had left, he had lost his father to suicide and he lost a lot of money, -roughly six figures in cash. That’s when he thought to himself, if my dad saw me now, he would be so disappointed. He finally decided to get help.

After getting clean, Chris partnered with Shyah, an aspiring filmmaker and together they planned to turn an 8000km bike ride from the Pacific to the Atlantic Coast into a feature-length documentary titled Inspire. He wanted to show people that it was possible to beat an addiction and that just as he lived my dreams, so too could others live theirs.